From an early age, she won many competitions. She was awarded a scholarship to study at the Conservatorium, Melbourne University, where she gained a Master of Music degree.

She has since taught at the Universities of Melbourne, Monash and Wollongong, in addition to being a piano examiner for the AMEB, and adjudicator. She has given many recitals in Australia and overseas. Nancy Tsou was born to a diplomatic family of the Republic of China (Taiwan). Her father was the well-known diplomat-scholar Chou Yun-ting, who was honoured by the Republic and the People’s Republic of China.

Her mother is the accomplished traditional painter Jane Lo Chou, who has exhibited widely in Asia and Australia. She started learning the piano from the age of five, in Buenos Aires, Argentina, and continued her studies in Melbourne and New York. 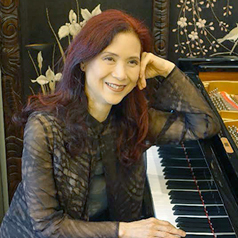