Melbourne’s Darren Danielson has become known as one of the most energetic and hardhitting drummers in the Australian music scene with Pseudo Echo. Darren’s warmth and good sense of humor resonates clearly whether he’s touring, recording or teaching music.

Darren was born with drumsticks in hand. Enjoying music from an early age and never without a band, he has built a successful professional career and gained enormous respect within the Australian music industry. As the drummer for multi-platinum bands such as Pseudo Echo and Chocolate Starfish the 80’s hard rock act Roxus, Darren continues to tour and play music on a weekly basis. He has had detailed, first hand experience of concert touring and its nuances, currently touring with Pseudo Echo and also performing regularly with Chocolate Starfish, who burst on to the charts in the early 1990’s.

Alongside Darren’s busy touring schedule he currently manages a diverse selection of artists for Music Supply, a Melbourne based entertainment management and Events Company. Darren is also working with Rewire to recruit and manage musicians as Rewire performers within the various programs and Events. 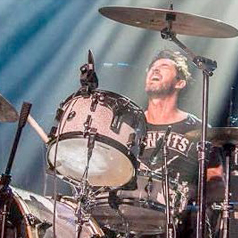